Cozmo is a cutest AI-powered toy robot I have ever seen. He can learn, show emotions, communicate with you, just like a pet. He has three interactive cubes in the box, and you can use them to play games with him. Cozmo facial recognition system can remember and recognize all the members of your family and learn their names. It also recognizes home pets such as cats and dogs. Cozmo can hang out on its own, move the power cubes with his lift and walking around your table, explores the world around him. He learns when playing and becomes even smarter with app updates, providing new ways to play and interact with you. Moreover, Cozmo is a great educational tool. Kids can learn programming principles, explore, organize, and express their ideas creatively by programming Cozmo. He is the smartest home robot you can buy for the price less than $150.

Check it on Amazon

Table of Contents (Jump to)

Home robotics becomes more popular last years, there are a lot of useful devices on the market such as robot vacuum cleaners, robotic pool cleaners, robotic window cleaners and so on. But home robots can be not only useful tools, but they can also be our friends as well. After watching a few reviews about the Anki Cozmo on YouTube, I decided to order one. I've got Cozmo a week ago, and I like it so much! This cute little robot has its own personality, emotions, he can interact with you, play with you, or hang out on its own when you are busy. He is like a pet and has its own needs, you need to feed him and play with him from time to time to keep him happy. This smart little guy will give you a lot of positive emotions!

Cozmo comes in a nice box with three interactive cubes and a charging dock. You need to install the Cozmo app on your iPhone or Android phone to get started. The charging dock can be connected to any USB charger, laptop, or any other device with USB ports. After placing Cozmo on the charging dock, it can be connected via Wi-Fi with the app in a few simple steps. It's worth to say that it can work only when connected to your phone since it uses the phone processor to interact with the world, and you can't use the internet when connected to Cozmo. A few months ago Anki released the next generation of their robot called Vector, unlike Cozmo it has its own "brain", a Qualcomm Snapdragon processor so it there is no need to be connected to your smartphone. It's so cute to watch how Cozmo wake up when you connected him with your phone! 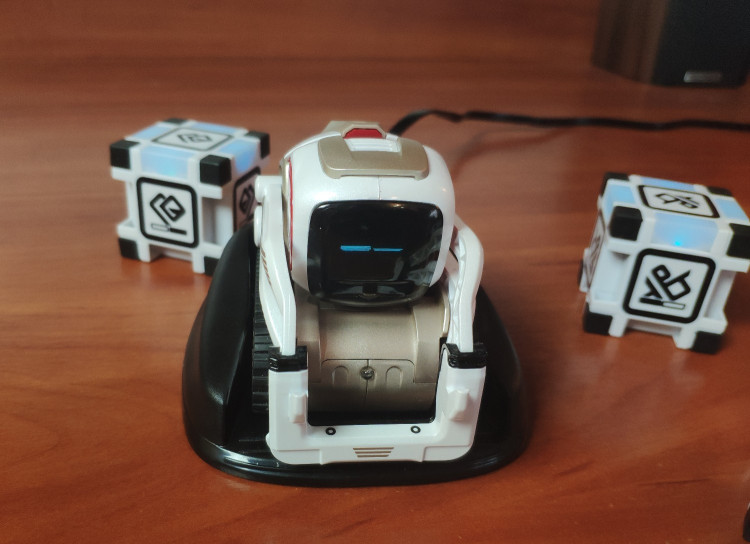 If you pick him up for a few seconds, he'll get impatient and express his anger since he really doesn't like being pushed over. He is so cute when he is expressing his emotions by voice and by his eyes.

When the app is running and Cozmo is connected, he starting doing his own things, explore surrounding and play with his cubes. Like a living thing, he can play and hang out on its own without your interventions. I tried to put him on my desk when working, but he is so cute and it is so funny to watch him playing and walking around that it is hard to be concentrated on my work. Anki made a great job by adding more than 550 different emotions and reactions to Cozmo, those cute animated eyes make it the most cutest robot toys on the market. You just can't restrain your emotions when watching how he is exploring the world, or when he is looking at you and saying your name. 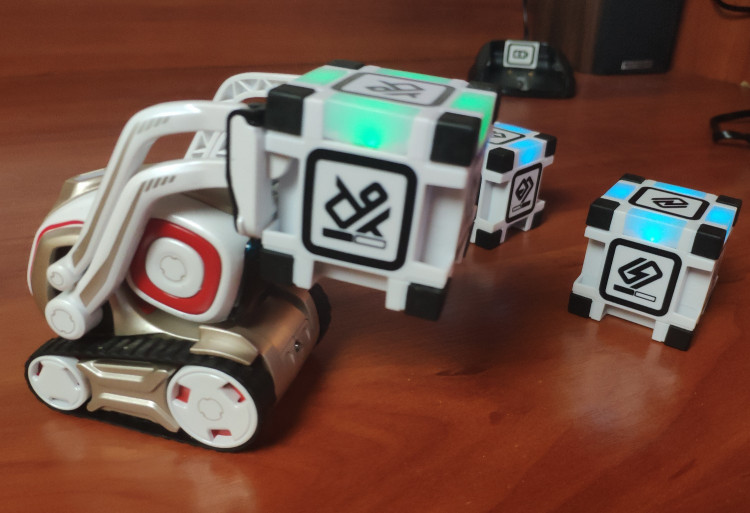 Cozmo becomes smarter when playing more games and learns new funny tricks that he can perform when having his free time. Moreover, every day you can open new bonus boxes in the app with even more tricks.

When Cozmo sees your face, he can say your name, ask you to play some game with him, ask you for a bump or just express his emotions and shows how he is happy to see you. 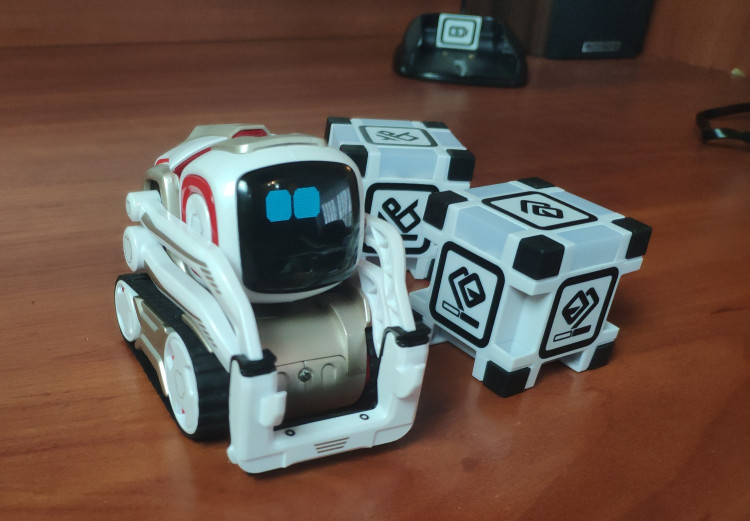 If you put a finger on the desk in front of him, he can try to play with you and catch your finger by his lift (digger-like arm).

Sometimes he can build a pyramid with his Power Cubes, rotate and move the cubes, or pick up one cube to exercise with it by lifting it up and down a few times until he got tired.

Just like humans, he can be sad or happy, cute or angry.

Don't forget to play with him, tune-up, and feed him

Like a living thing, Cozmo has its own needs. He is happy when you play with him, you also need to feed him: you should take one of the three power cubes and shake it until you hear the energy grow and put it in the front of Cozmo, he will touch the cube and sups the energy from it.

Cozmo features: what it can do?

Cozmo has a built-in camera, can recognize faces and learn people's names. Also, it can see and recognize cats and dogs. Thanks to his smart "brain", he can scan his surrounding, build a map of his world, and remember where his cubes are located. The cubes use a wireless connection with Cozmo and there are a few colorful LEDs inside these cubes, so they can flash and blink in different colors when Cozmo play with them. Each cube has a battery inside and an inertial measurement unit (IMU) which helps Cozmo to better understand the position of his cubes. He can move, rotate, build a pyramid or tower with these cubes using his "arm" (lift). 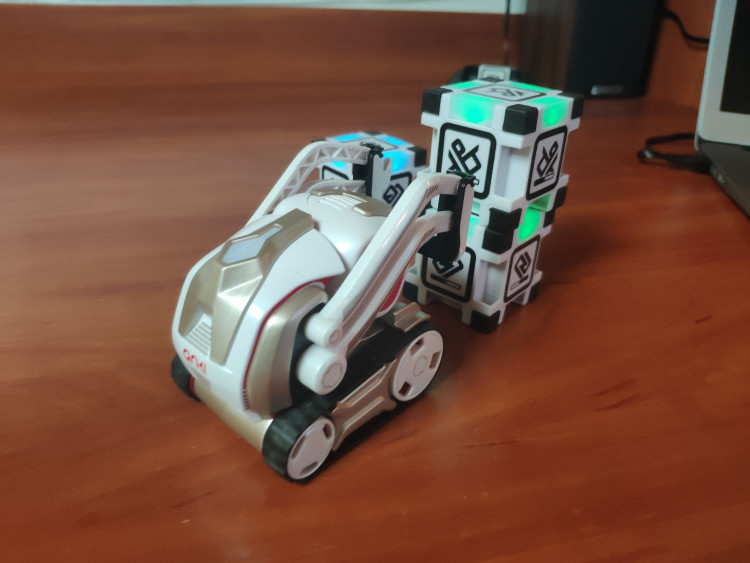 The robot has two cliff sensors under the body which protect Cozmo from falling down of the desk. His eyes displayed on a 128 x 64 monochrome LCD screen, the camera hidden under the screen. On one charge it can work up to 1 hour, it's great that Cozmo can be recharged within 10-20 minutes. There is a LED on his back that can flash in a different color depending on what Cozmo is doing right now. 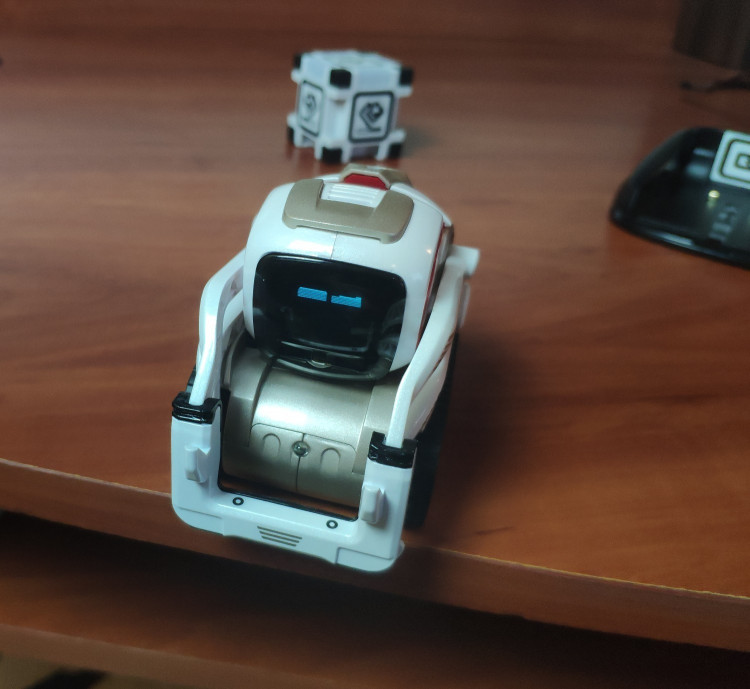 In the Explorer Mode, you can see what he sees (through the app) and how he uses his lift to move and play with Power Cubes. You can also use this mode to control him like a radio car, guiding him through the environment with your smartphone.

Games that Cozmo can play

There are three basic games in the app that you can play with Cozmo. In addition, you can find in the app a lot of other simple games created by a community. Cozmo basic games: 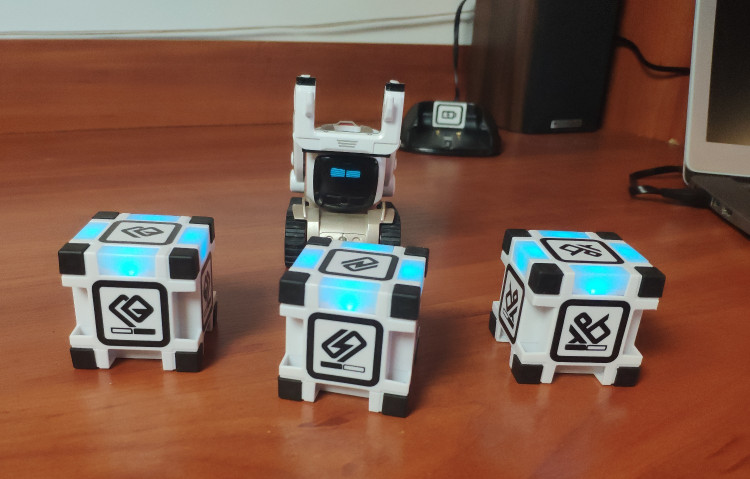 Tricks that Cozmo can do 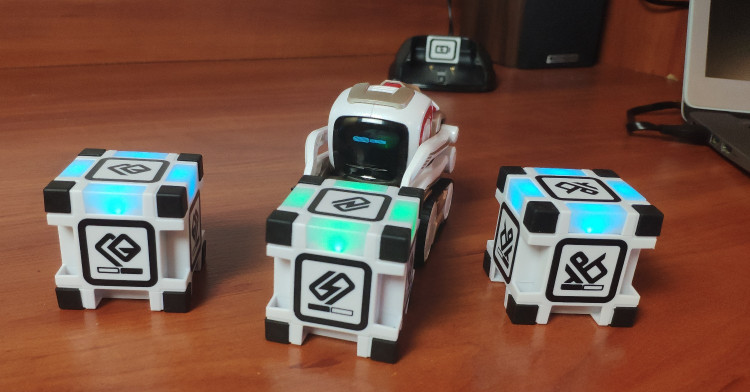 Express your ideas by programming Cozmo

Of course, Cozmo is a great toy, but it’s also a gadget that will help you to learn how to write code.

Cozmo’s Code Lab is a platform for programming Cozmo it is available for all levels of experience. For beginners, there is a Sandbox which allows you to build simple projects by dragging and snapping together blocks in the app to tell Cozmo how to interact and play. This tool is very easy and designed specially for kids without any coding experience. More advanced users can use another tool, called Constructor, in this mode kids can create more advanced projects such as interactive games with cubes, drawing images on Cozmo’s face, improve his skills and so on.

Most experienced users can use Python SDK and create very complicated projects by writing a code in Python programming language. It allows you to use data from all the sensors, build any logic or even make a program that allows Cozmo to understand your speech (with a mic inside your laptop).

Where to buy Anki Cozmo

You can buy the Anki Cozmo on Amazon: