The new Dyson 360 Heurist is a unique model on the market that does and does not look like the robot vacuums we used to know at the same time.

One of the things to notice — its charging base that is sleek, slim, and foldable and it looks really minimalist and does not take a lot of space in terms of storing the vacuum.
It is taller than most robot but at the same time smaller in diameter. 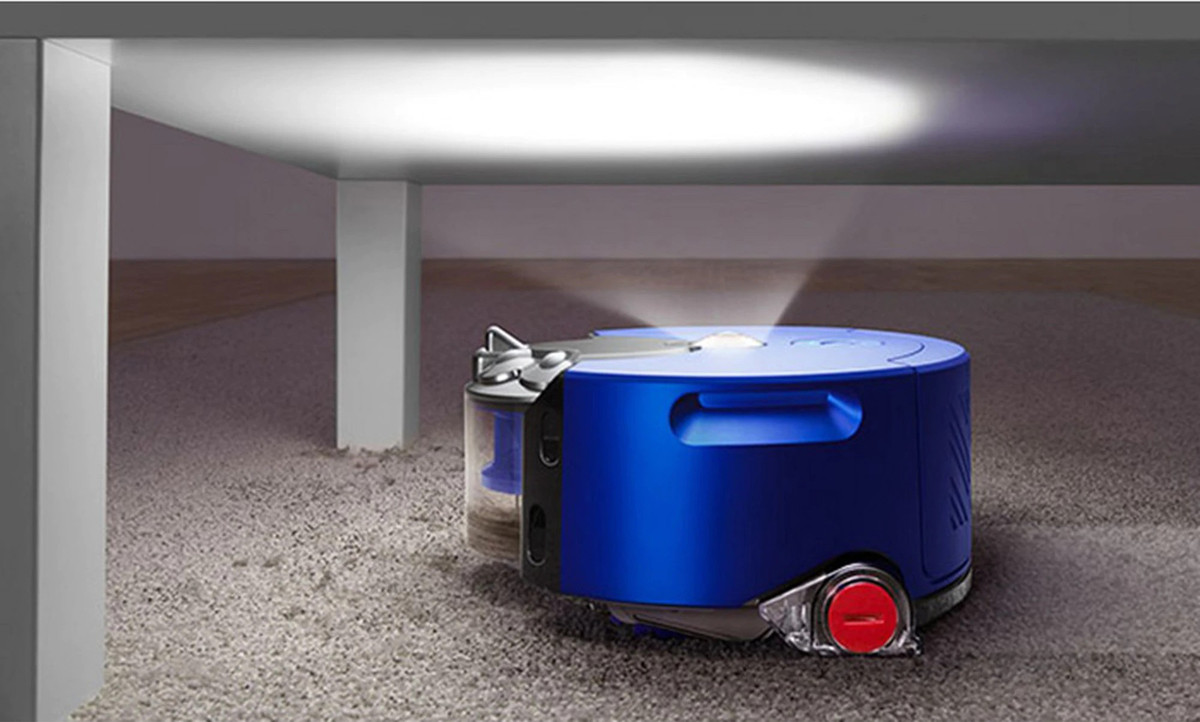 This shape has pros and cons. The Dyson can navigate around most obstacles without getting stuck, but at the same time, it's tall enough to not fit under every furniture in the house.

It does not have wheels, it has tank tracks which is not the usual thing. One of the things we have never seen before — the LED lights around the camera sitting on top. The primary issue with the camera is that those robots cannot map in the dark and always need light to be on to create one. The Dyson's lights solved this problem, and now the robot can «see» in the dark. The lights brighten the room depending on how much lights the area needs for the robot to understand it's location. When the light is on, the LED lights turn off.

The manufacturer claims the robot to be twice more powerful than any robot vacuum and the crevice test shows amazing results. In fact, the best in the industry.

The cleaning brush is wider than most brushes and locates very close to the ground, which, along with strong suction, allow the robot to provide deeper cleaning on carpets. The close-to-the-ground cleaning brush also does a great job at picking up things, even the debris such as cereals which is a bit unusual. But because of Dyson's patterned cyclone bagless system, this debris stuck inside, and you have to clean it every once in a while. There's a clog system indicator that informs where you need to clean the machine. 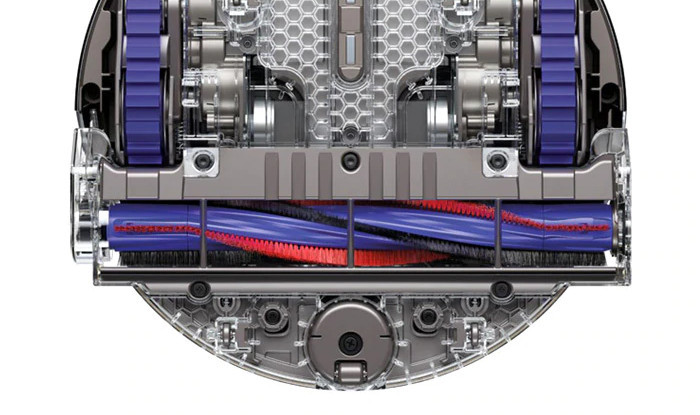 The navigation pattern is also unique, the robot moves in small square shapes instead of back-in-forth steps other mapping cleaners do. Though it does not stop the Dyson from covering the whole area. The one thing to mention: it takes too long for the vacuum to finish one room and considering its battery life, I might conclude that the Dyson 360 Heurist was not designed for big homes. 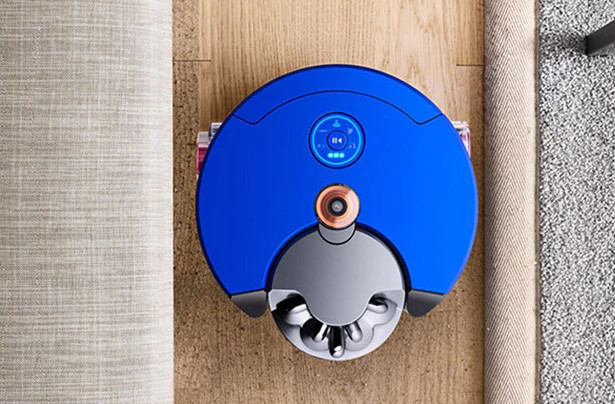 The app allows creating certain zones and order the Heurist to clean them, and this is the first camera-based robot vacuum that supports this feature. The iRobot Roombas i7+ and s9+ only have keep-out zones (virtual block-offs), and the Dyson's blocked zones seem to be more accurate. You can create the zones, name and save them, in addition, to make the robot work there further. Another new option — adjusting some settings depending on how you want the robot to adapt in this area including «Avoid area» option, «No brush bar» which turns off the roller spinning in this zone, and «No climb» that would not make robot adjusting its height while working within the area. 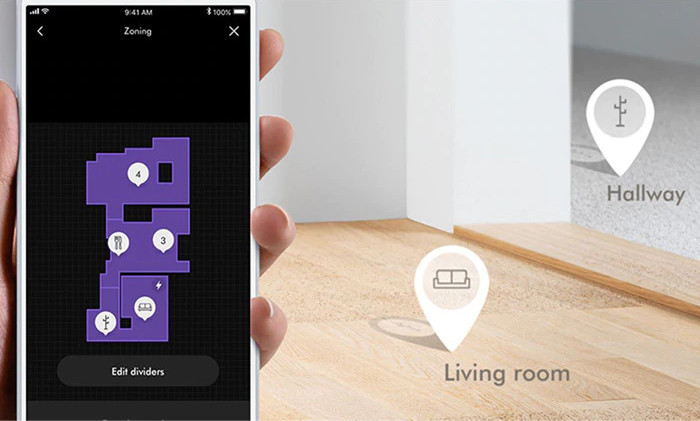 The machine is great with collecting pet and human hair, it's not the best but better than average in the business. However, because of it being close to the floor, the robot might get tassels from some rugs. 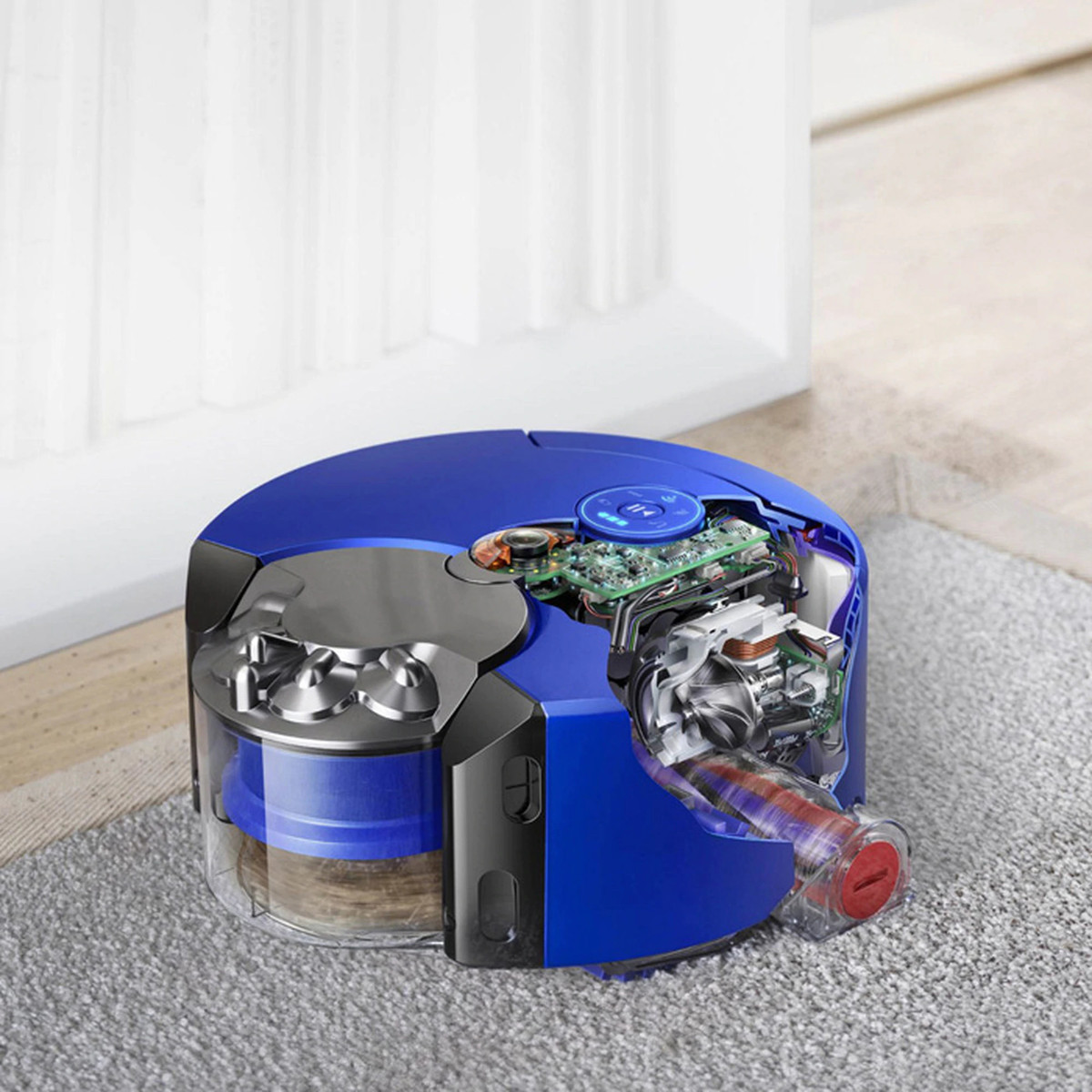 Because of its size, the cleaner has a small 330 ml dustbin that again, does not make the robot suitable for homes with pets.

This model is not going to be on sale in the US anytime soon because it was designed for some types of homes, but apparently, Dyson is working on another model that would be more suitable for the US houses.

To conclude: the Dyson 360 Heurist is a robot vacuum that leaves me confused. It has some fresh ideas other models do not have, but on the other hand, these new features have some cons such as long time to take when cleaning bigger areas, a taller body that cannot fit under most couches, and the bagless system that gets clogged with big debris. It is expensive, you will have to spend $1,200 to get one which is something to consider. The Dyson is not suitable for big homes, and because of its small container, it is not the best for those who have pets with long fur. In fact, I can't say what the Heurist is good for. To answer this, let's keep in mind that this robot was designed for the Japanese market too and there are different styles of homes, so maybe the Dyson 360 is ideal for Japan?

I have mixed feelings about this machine. Do you think the Dyson 360 Heurist can compete with the same price Roomba i7+?

Roomba i7+ is now available on Gearbest

iRobot Braava Jet 240 vs. 380t vs. M6: The Difference Between Mopping Robots

Veniibot Venii N1 A robot That Knows When Not To Mop?

Thanks again! One last thing- I see that you also reviewed the ilife w400, but that robot doesn't seem to get a lot of ...
Xiaomi MiJia 1C Review: Impressive Cleaning Performance at a Reasonable Price
Natalie Red Today at 06:43

With virtual walls available you can set them so the robot avoids the carpet. Since it is still in beta, you can not mak ...
Xiaomi MiJia 1C Review: Impressive Cleaning Performance at a Reasonable Price
RS Today at 04:42

Amazing. Thank you so much for such a detailed reply (and so quick!) You are terrific! One other quick question. Can ...
Xiaomi MiJia 1C Review: Impressive Cleaning Performance at a Reasonable Price
Natalie Red Today at 04:24

Hi there As mentioned by Rolja in the comments above, some users already have an experimental option in the Mi Home app ...
Xiaomi MiJia 1C Review: Impressive Cleaning Performance at a Reasonable Price
RS Today at 03:59

Thanks for the great review. Do you have any confirmation on whether this robot supports virtual walls? Practically spe ...
Xiaomi MiJia 1C Review: Impressive Cleaning Performance at a Reasonable Price
AdamD Yesterday at 11:37

We are having the same problem! After the update the mopping function is not working because no water is being released! ...
Viomi V2 vs Roborock S6: the Differences Explained
Natalie Red Yesterday at 05:20

Ah I see. Try it then. Would love to hear how it goes :)
Roborock S5 Max Review: Better Mopping Experience at a Reasonable Price
Esko Haapaniemi Yesterday at 05:16

It is not so easy to draw no-go-zones by the phone, when you are not able to figure out, where the carpet really precise ...
Roborock S5 Max Review: Better Mopping Experience at a Reasonable Price
Natalie Red Yesterday at 05:06

Here you can read a comment about how to manage multimapping. It is about the Roborock S4 but they all have it the same ...
Roborock S5 Max Review: Better Mopping Experience at a Reasonable Price
Esko Haapaniemi Yesterday at 04:52

Yes I can do it. I am supposed to get S5 Max Thursday. For Corona reasons, it is going to be delivered to my car in fron ...
Roborock S5 Max Review: Better Mopping Experience at a Reasonable Price